As I sit here contemplating the miracle of celebrating 2 years clean and sober, it’s hard not to think back to where I was physically, mentally and spiritually when I reached that jumping off place. Life has transformed into a beautiful flower that started out as an ugly weed.
No matter how many times I pulled the weed, the vile and persistent malignancy grew back. Many times over the course of 20 years, I tried to clear the garden of the weed, but each time it grew back faster, larger and more fierce than the time before. With each attempt, I got more discouraged and disheartened. Eventually, after all those years, the garden was consumed and overrun. I lost the will or hope that it could ever be cleared. I had no anticipation of ever having a beautiful garden. I stopped even trying.

Every day, I peered out of my tiny window to examine the sun shining and the day bright all around my overgrown plot of the world. It seemed the other yards were full of lovely greenery and fragrant foliage, but my garden was crowded only with darkness of the weed. Because I had given up, the tumor crept slowly through my tiny window and reached its vines into my very soul. It took over my garden, my home and now, my ever so insignificant existence. The weed had won and I admitted defeat. I readied myself to die.

What took place next was nothing short of a divine intervention by the Master of all Gardeners. As if by magic, a Power much greater than I knew existed, ripped me away from the clinging evil fingers of the weed and although the sudden departure was not without pain, I saw a sliver of hope. I was carefully and purposely placed in a new home, with a very large window and an ever important fresh plot of soil. I was granted another opportunity to grow my dream flower. I was scared, but it felt different this time. This time I was not alone. This time, I was surrounded by neighbors who shared their knowledge and understanding. They taught me that a successful garden comes from a progression of steps and it is heavy work. Before I could plant, I had to make sure the soil was nurtured and fertilized with love, forgiveness, acceptance and trust. Without a rich foundation, nothing beautiful could grow. I determined that I had to trust these new friends and follow their direction without question. Before too long, after tilling and purifying the soil, the seeds were planted. 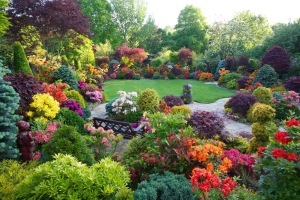 Day after day, I tended to the garden. Some days, the rays of sunlight beamed down on the budding plants, and some days sheets of rain accompanied by thunder and lightening pelted the new growth. I kept a diligent watch, determined to keep any signs of weeds from forming. To my amazement, a seedling appeared. As it rose, I noticed how solid its stem was and at top a bloom finally appeared. I couldn’t sit back and hope, I had to continue the course of guarding it tenderly. In time, the tightly closed petals slowly opened to reveal the most vibrantly colored flower I had ever seen. To my amazement, one flower spread to form another, then another. From love, grew love.

The garden has now grown still larger and more beautiful than any dreams I ever had of a single flower. I realize now, there is no end to it’s majestic potential. As long as I stay humble and tend to the miraculous garden on a daily basis, the weed can not arise.

Today I possess an ocean of gratitude for all the gardeners who shared their knowledge with me and continue to do so. Most of all, to the Master Gardener whose grace saved me when I couldn’t be salvaged, I dedicate myself to you. I vow to assist anyone, anywhere who reach out for my help with their garden.
To quote Maria from The Sound of Music, “Nothing comes from nothing, nothing ever could.”

5 thoughts on “  Nothing Comes from Nothing”

A daily selection of the best content published on WordPress, collected for you by humans who love to read.

One Wife's Journey Back from Addiction and Rediscovery of Self

While you're away, the pets will play!

The Bottom of a Bottle

Trust me, I've been there, I've looked, I've searched and I know now, that there are no answers to be found in the bottom of a bottle or on the edge of a blade! Fighting Hard, Recovering, Rebuilding, REBORN. Moving on from addiction to a new life.

My life and other sordid tales

pbandchelly.wordpress.com/
Diary Of A Traveller

a pilgrimage of the heart

"Its a wonderful day to experience something new."

Sitting Pretty In The Queen City

life in the world's greatest places